History of the Princeton Area 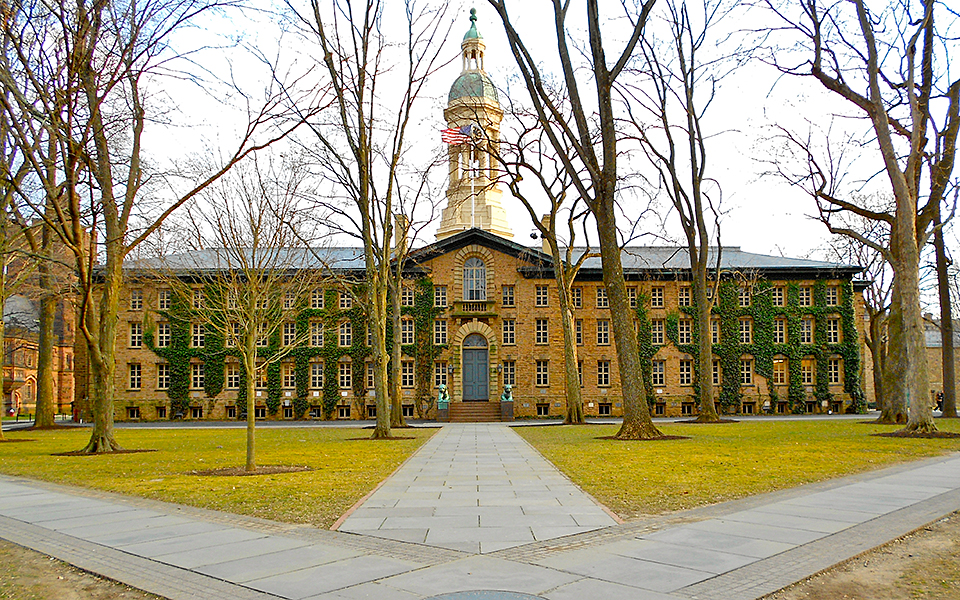 Built circa 1756, Nassau Hall (Old Nassau) was designated a National Historic Landmark in 1960 and was listed on the National Register of Historic Places in 1966.

Note: While this history references Princeton Borough and Princeton Township, the two municipalities merged in 2013.

Colonial settlement in the Princeton [†] area began during the late 17th century, but the human history of the region dates back thousands of years. The earliest inhabitants of the area today known as Princeton Township and Princeton Borough were the Lenape Indians (called “the Delawares” by the English). These migratory people ranged throughout New Jersey and along the banks of the Delaware River and its tributaries, from the lower reaches of the Hudson River to the mouth of the Delaware River. Early Native American communities thrived on the area’s rich natural resources. The region’s bountiful creeks and forested uplands provided rich natural resources for hunting, fishing, pottery-making, and simple farming.

Toward the end of the 17th century, the first settlers of European descent began to move into the area from the Raritan Valley and the nearby counties of Bucks and Burlington by way of numerous routes, including the King’s Highway, one of the most heavily trafficked roads in colonial New Jersey. The area that would later be called “Princeton” was then, as it is now, gently rolling with fertile soils and moderate climate, and the earliest settlers came to farm these rich soils. Numerous streams and rivers also provided plentiful opportunities for grist mills and water transportation.

The first European to establish residence within the eventual Princeton boundaries is believed to be Henry Greenland, who opened his “house of accommodation” on what is now called Kingston Road in 1683. Greenland’s tavern was to become a prominent gathering spot and meeting house during the early days of settlement due to its location on the border between the original colonial provinces of East and West New Jersey, a convenient stopping point halfway between New York and Philadelphia. As more settlers moved to the area, increasing tracts of land were cleared for farming, lumber, and fuel. The area was commonly referred to as “Stony Brook” in the deeds and correspondence of these earliest settlers. Around 1725, records from early colonists, such as Nathaniel Fitz Randolph, a native of the area, began to use the name Princeton. The origins of the name are not directly recorded, and several accounts exist. The name is thought to originate either out of homage to William Prince of Orange, who was the nominal head of the New Jersey Colony, or, perhaps more likely, as a complementary name to nearby Kingston, New Jersey.

During the colonial period, Princeton rose in prominence with the construction of Nassau Hall in 1756. Nassau Hall housed the College of New Jersey, which was relocated from its first home in Elizabeth Town to Newark and then to Princeton. The College would not become “Princeton University" until 1896, but it exerted strong influence on the area from its earliest days. The College of New Jersey was unique among colonial colleges in that its original charter allowed entrance to “any person of any religious denomination whatsoever.” In the upcoming years of the Revolutionary War, Nassau Hall would temporarily serve as the home for the Continental Congress in 1783 and nine College of New Jersey alumni would attend the Constitutional Convention in 1787.

During the Revolutionary War, dozens of battles were fought on New Jersey soil, a number of them in the Princeton area, including the first and second Battles of Trenton and the Battle of Princeton. The period during which these battles were fought is known as the “Ten Crucial Days" because the victories won during this period greatly bolstered the morale of the colonists. The Ten Crucial Days began when General Washington and 2,400 troops of the Continental Army crossed the ice-filled Delaware River by boat on Christmas Night in 1776.

Beset by freezing rain, the army then marched nine miles to Trenton, and early the next morning delivered a stunning surprise attack on the Hessian garrison stationed there. After ferrying their Hessian prisoners across the Delaware to Pennsylvania on December 26, Washington’s troops recrossed the Delaware into New Jersey to engage the British at Trenton once again on January 2, 1777. Fighting along the Assunpink Creek ended at dusk. During the night, Washington led his troops along a back route toward Princeton, where he attacked General Cornwallis’ rear guard on the morning of January 3, 1777, in the vicinity of Clarke Farms, just south of Princeton Borough. While the second Battle of Trenton (also known as the Battle of the Assunpink) had no military outcome, it enabled another American victory, at Princeton. In the 10 days succeeding Christmas, Washington had engaged the enemy in three battles, and by winning two had restored belief in the possibility of ultimate victory.

Princeton Borough was incorporated in 1813 along boundaries similar to the current ones in an effort to consolidate into a single municipality. Until its incorporation, Princeton Borough straddled the border of Somerset and Middlesex counties, with Nassau Street as the dividing line. In 1838, Mercer County and Princeton Township were established by an act of the New Jersey legislature from parts of Middlesex, Burlington, and Hunterdon counties in an effort to modernize and balance state politics in New Jersey. Although the boundaries of Princeton Borough and Township were substantially as they are today, some of the present lands were still held by West Windsor Township. It was not until 1853 that West Windsor Township completed the gradual ceding of the remaining land between the Delaware and Raritan Canal and Nassau Street, creating the modern municipal boundaries.

The construction of new roads such as the Princeton-Kingston Branch Turnpike in 1807 helped bring activity and commerce to the Princeton area. This growth in traffic coincided with the establishment of the Princeton Theological Seminary in 1811 and the construction of Alexander Hall in 1815. The development of Princeton as a commercial location began in earnest with the construction of the Delaware and Raritan Canal, as well as the Camden and Amboy Railroad in the 1830s. Two basins were constructed for turning barges (one of which still exists), and the coal and construction industries began to flourish in the area. Whig and Clio Halls at The College of New Jersey were constructed, along with a new First Presbyterian Church. The first stages of the Drumthwacket House, which would eventually house the governor of New Jersey, went up at the same time. Numerous other major buildings were designed and built in Princeton Borough and Princeton Township during the first half of the 19th century, including villas for the descendants of revolutionary leader Richard Stockton and renovations and modernization of Nassau Hall.

Following the Civil War, the College of New Jersey emerged as a dominant force in building the townscape of Princeton. By 1896, when the college was officially renamed Princeton University, the Collegiate Gothic style was firmly in place as the dominant architectural style and would remain so for the next 50 years. In the following years, the university continued to expand along Nassau Street, University Place, and along both sides of Washington Road.

By the turn of the 19th century, most of Princeton Township’s arable land was in cultivation or reserved in woodlots for fuel and timber, leaving much of the township cleared. While agriculture was Princeton Township’s primary industry during its first 50 years, by the late 19th century, it began a slow but steady decline. In 1890, the owner of Worth’s Mill, on the Stony Brook, closed down his operation, an indication of the declining importance of grain farming in the area. Agriculture’s decline was hastened by real estate development as the northwestern portion of the township began to suburbanize in the 1920s and 1930s.

Following World War II, Princeton Township experienced rapid suburban growth. Advances in rail and automobile transportation put Princeton within an easy drive or train ride from two of the Northeast’s major metropolitan centers: Philadelphia to the southwest and New York to the northeast. Princeton Borough gained statewide prominence by being selected in 1945 as the location for the state’s first Governor’s Mansion at Morven. The township then received that honor in 1982 when the residence was located at Drumthwacket.

Though many portions of Princeton Township have transitioned from an agrarian to a suburban character over the past six decades, the area has been able to maintain much of it historic charm, as well as significant areas of open space. The township is home to numerous natural areas, parks, and historic resources, as well as the prestigious Institute for Advanced Study. Princeton’s historic town center, Princeton Borough, has become a vibrant hub, with a lively “main street” that is home to numerous businesses, institutions, and well-used public spaces. Together, the borough and township also host Princeton University, one of the nation’s premier centers of advanced education.

The 1970 census shows the effects of suburbanization, with the township’s population (13,651) eclipsing that of the borough (12,311) for the first time since its incorporation in 1813. Population growth has been relatively gradual since 1970. Princeton’s desirability as a place to live and work has resulted in a nearly “built-out” condition in which most of the available land has been either developed or preserved. The 2000 census counts 14,203 residents in the borough and 16,027 in the township.

Today, Princeton Township and Princeton Borough (See note, above regarding the merger of the two municipalities.) are renowned for their history, natural beauty, and cultural richness. Princeton boasts Revolutionary War-era homes, as well as modern residential, educational, and commercial communities. The township and borough offices are characterized by their close cooperation in planning and the provision of services, as well as their collaborative relationship with Princeton University. Although mostly built-out, Princeton is still experiencing some limited residential and commercial development and redevelopment. Such growth poses both challenges and opportunities for the two municipalities, as they strive to preserve the quality and character of their historic past, protect their natural resources, and forge a path to a prosperous and sustainable future.