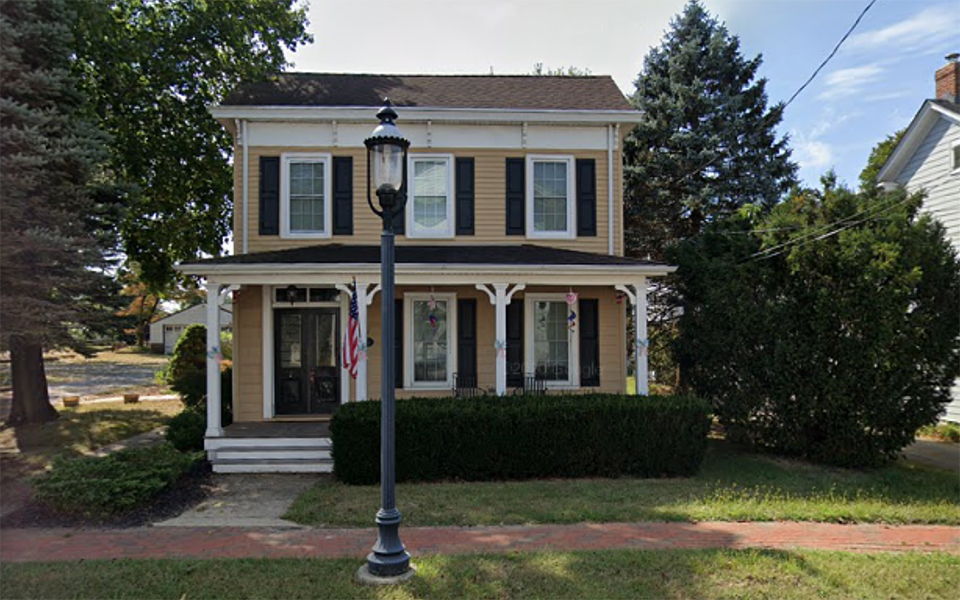 Photo: Home at 48 Church Street (built ca. 1909) located in Robbinsville's Windsor Historic District; the District was listed on the National Register of Historic Places in 1988.

Colonial settlement in the Robbinsville area began during the late 17th century, but the human history of the region dates back thousands of years. The earliest inhabitants of the area today known as Robbinsville were the Lenape Indians (called the “Delawares” by the English). These migratory people ranged throughout New Jersey along the banks of the Delaware River and its tributaries, leaving a legacy of stream names throughout the area. For example, Assunpink Creek, the largest waterway in Robbinsville, is Lenape for “rocky place that is watery.” Early Native American communities thrived on the area’s rich natural resources. The region’s creeks and forested uplands provided resources for hunting, fishing, pottery-making, and simple farming.

Although the Lenape Indians were the original inhabitants of the land, by the early 1700s they were almost entirely displaced by European settlers, who received land grants from the East Jersey Board of Proprietors starting around the turn of the 18th century. Quaker and Presbyterian settlers moved into the area by way of Old York Road, an early trail which today forms part of the line between Mercer and Monmouth Counties, as well as the southeast border of Robbinsville. European settlers came in search of religious freedom and to farm the generally flat and very fertile soils of Robbinsville. Numerous streams and rivers provided plentiful opportunities for mills and water transportation.

The first European to establish residence within the eventual boundaries of Robbinsville is believed to be Robert Burnet, a Scottish Quaker who received a 4,000-acre grant stretching across Robbinsville, Allentown and Upper Freehold in 1690, and who settled his tract in 1700. He was followed by Augustine Gordon, another Scottish Quaker. There were soon two main groups of settlers in the area now known as Robbinsville: a group of Presbyterian immigrants from Monmouth County, who settled along Old York Road and attended the Allentown Presbyterian Church, founded in 1720; and a group of Quakers from Nottingham in Burlington County who settled in the western portion of the township.

The Village of Allentown, to the southeast of present-day Robbinsville, developed around the mills of Nathan Allen on Doctor’s Creek. The historic mill remains a landmark in Allentown. Allen, son-in-law to Robert Burnet, owned what is now the Wittenborn property, but the current house is probably from a later date.

The earliest hamlets within Robbinsville began to form around this time along Old York Road; these included Sharon (now New Sharon), which included establishments such as the “Inn of the Crooked Billet” (aka Cattail Tavern) and a cider distillery; as well as Cabbagetown, now known as New Canton.

Until its demolition in 2008, the Inn of the Crooked Billet was most likely the oldest structure in Robbinsville. The Inn was privately owned for years and used as a residence. Under private ownership, the residence fell into extreme disrepair. After the owner passed away, Robbinsville purchased the property hoping to find a way to preserve it. Unable to obtain funding to save the residence, the township eventually had to declare the structure unsafe. After documenting the structure through photos, a salvage company was hired to remove and preserve any possible historic elements before the structure was demolished. During the Revolutionary War, Robbinsville’s proximity to Trenton and Princeton (both the site of major battles during the winter of 1776‑1777) ensured its contribution to the war’s history. Troops moved through the area along Trenton Road (now Robbinsville-Allentown Road) and encamped in the town during 1778.

The area that is now Robbinsville was initially the southernmost tip of Piscataway Township, established by the New Jersey legislature in 1710 to include wide swaths of central New Jersey. By 1724, Piscataway’s land south of the Raritan River became New Brunswick Township, and in 1741, the southernmost portion of New Brunswick was chartered as the Township of Windsor, which was further subdivided into East and West Windsor in 1791. After this subdivision, Robbinsville was still a part of East Windsor Township, and would remain so until 1859.

While colonial settlement in present-day Robbinsville was concentrated in the township’s southern reaches, the northern portion of the town experienced significant growth after the American Revolution. In 1816, New Jersey funded a stagecoach line between New York and Philadelphia which would mostly follow present-day Route 130, and in 1818 the village of Centreville (now Windsor) was established along the line in an area known as Magrilla. More importantly, in 1830 the Camden and Amboy Railroad was granted a charter to link the Raritan and Delaware Rivers. By 1832, this line ran from Bordentown to Hightstown, and brought some of the nation’s first railroad service to Robbinsville, with stops in Robbinsville at the villages of Centreville and Newtown Station.

Commercial service along the Camden and Amboy Railroad in 1833 spurred tremendous growth at its stations. In 1846, Centreville renamed itself Windsor so it could receive its own post office, as there was another Centreville already established in Hunterdon County. At that time, Windsor boasted a hotel, several general stores, a freight depot, and industry such as mills and a brick-making establishment.

Newtown grew as well and a post office was established there in 1844. The post office was named Robbinsville, although the town did not change its name officially. Robbinsville takes its name from George R. Robbins, a popular U.S. congressman from the area. In 1859, the area had grown large enough to constitute its own township, and the legislature established Washington Township from the southern half of East Windsor, effectively creating present- day Robbinsville.3 Washington Township’s boundaries remained the same until 1996, when a slight jag was introduced on the border with Hamilton, taking in the entirety of Mercer Mobile Home Park. The current boundary of the township is shown on Figure 2: Robbinsville Township.

The Robbins family farmhouse on Hillcrest Farm dates back to the early 19th century. The Robbins can trace the land back to the 1700s when the King of England indentured about 120 acres, called the Milford Tract, to Moses Robins (as the name was then spelled). The land was bought in 1818 by David Robbins and it is believed that he built the house.

The property has passed through five generations within the Robbins family, the namesake of Robbinsville. In 1850, David Robbins passed the land on to his son, Elisha, who handed it down to his son, Milnor, in 1900. Lester Robbins obtained the land in 1945. Washington Township purchased the house (one of the few surviving brick farmhouses in Mercer County) and approximately 23 acres from Dr. Lester Robbins, Jr. in July 2001. Additional funds came from the Green Acres program and Mercer County. The Delaware and Raritan Greenway was instrumental in helping the township purchase the property.

Washington Township, which officially changed its name to Robbinsville in 2008, remained a mostly agricultural community throughout the late 19th and early 20th century, with much of the land’s original forest being cleared for cultivation. Forested areas tended to remain only in the wet marshland along streams such as the Assunpink Creek, Miry Run, Indian Run and Bear Brook.

Reaching a population of 1,294 in 1875, the township was operating six one- room schoolhouses, which operated until the Windsor and Robbinsville Schools were opened in the early years of the 20th century. One of these schools, the former Union School built in 1873, was moved to the municipal complex next to the Senior Center and is now referred to as ”the little red schoolhouse” (see photo below).

During the late 19th century, the center of wheat and grain production moved to the Midwest. Farmers in Robbinsville Township largely switched to farming vegetables such as tomatoes, corn, beans, and potatoes.

During the 20th century, perhaps the most significant development in Robbinsville was the transition to a primarily automotive-based transportation system. Route 130 was widened, roads were constructed, and the Windsor rail station shuttered during this time. In 1951, the New Jersey Turnpike (NJT) was built across the farms of southern Robbinsville, although there were no interchanges in the township when it was first constructed. The turnpike was one of the first modern high-speed toll roads in the nation and was a precursor to and eventual part of President Eisenhower’s Interstate Highway System.

The rise of the automobile occurred alongside the decline of rail-based transportation. The Camden and Amboy Railroad passed into the hands of other rail companies. Although the railroad continued to carry freight in the 20th century, it has been entirely unused for decades.

With the end of World War II and the establishment of the automobile as a primary commuting option, Robbinsville Township began to experience suburban growth. The township began a formal planning initiative with the adoption of its first zoning ordinance in 1949 and a land subdivision ordinance in 1954. By the late 1950s and early 1960s, the township saw its first major developments with the Windswept and Hillside Terrace tracts and the Sharon Road School. However, Robbinsville Township was still far enough from major employment centers that these developments remained isolated in an agricultural landscape for many years. After the construction of I-195 and the interchange with the NJT in the 1970s, Robbinsville Township had much more direct access to New York and Philadelphia, Trenton, and the Jersey Shore.